June 20th, 2022 | Posted by Teresa Smick in Uncategorized - (0 Comments)
Congratulations to Selma Ragle, the winner of the Dorothy Sevier Matson Scholarship.
A big thank you to Skyla Hu, Zach Hogg and Mayson Anderson for applying.
As always, it’s hard to pick a winner every year as we get very strong applicants. We also wish you much luck in your futures. We are sure all four of you will do great things.
11

This meeting can be attended in person or via Zoom
Shadle Public Library is located at 2111 W. Wellesley Avenue, Spokane, Washington
Richard Sola will present:
1) Creating a Region – The Populating of Spokane & The Inland Empire, 1870-1920
2) Living Their Lives in the Inland Empire – 1870-1920
Susan Dechant will present:
3) A Monumental Story, a Grand Coulee Mystery
Price is $25.00 for EWGS members and $35.00 for non members with a Taco Bar offered for an additional $8.50 for those attending in person.  Go to www.EWGSI.org for more information and to find out how to register.  Just click Upcoming Events on the left side of the home page and scroll down to the Spring Seminar..

Roots Tech is Coming and it is Free!

February 19th, 2022 | Posted by Teresa Smick in Uncategorized - (0 Comments)
Do you watch Antiques Roadshow on PBS?  Did you know that Antiques Roadshow is coming to Boise, ID on May 31st?  Do you have an item to share or would like to attend the show? This is your chance!  Here’s a link to enter their drawing for free tickets. The deadline for entering is March 21st. Here’s the link:
https://www.pbs.org/wgbh/roadshow/tickets
Good Luck!

DOROTHY SEVIER MATSON
Dorothy was a lifetime resident of Pullman, being born 27 January 1920 to Henry Sevier and
Almira Lakin Sevier, the youngest of 6 siblings and 4 half-siblings. She graduated from Pullman
High School and attended beautician school in Spokane. She then returned to Pullman to work until
she joined the WAVES (Women Accepted for Volunteer Emergency Service). While in the Navy,
she was stationed in Washington, DC during World War II where she worked with decoding.
Following the war, she returned to Pullman and worked at Washington State College (now
University) in the mailing department until she retired. She married George Matson 7 January 1955
and he passed away 23 February 1982.
Dorothy had a thirst for knowledge about the past and the people of this area, particularly
things relating to Whitman County genealogy and history, with an emphasis on Pullman. She was
a cornerstone member of Whitman County Genealogical Society, a lifetime member, and the
researcher, who for years single-handedly responded to all of the people who wrote to WCGS asking
for help in finding out more information about their Whitman County families. She collected
information on people of the area and clipped thousands of newspaper articles, mostly obituaries,
but also anniversary celebrations, marriages, reunions and more. She pasted these articles on index
cards and several members of WCGS entered every name from these cards into a computer database.
WCGS then published three volumes of indexes to these cards entitled “Whitman County
Washington Families, An Every Name Index to the Newspaper and Resource Collections of Dorothy
Sevier Matson, Vols. I, II and III.” These three indexes (volumes) total over 650 pages of just
names! The original cards are stored at the WCGS library and are regularly used by WCGS
researchers and others visiting the library. In 2000, Dorothy donated her entire library and all of her
research files to WCGS.
Prior to her death on 18 August 2002, Dorothy made a substantial gift to Whitman County
Genealogical Society in memory of her brother, Dale Sevier. Dorothy’s dream had always been to
write a history of Pullman. Although she was not able to realize that dream in her lifetime, she knew
that Whitman County Genealogical Society would carry on her legacy of helping others who were
researching their Whitman County roots. She also knew that WCGS would help keep alive the
history and records of the Palouse and share it with others, through publications, research, etc.
WCGS felt the best way to remember Dorothy was to create an endowed fund to honor her.
WCGS selected Inland Northwest Community Foundation (INWCF), now Innovia Foundation, to
handle this fund. The fund was established in September 2009. The WCGS Endowment Fund and
Dorothy were featured in the 2010 INWCF Calendar and Annual Report on the month of July.
With the annual distributable income from the endowment fund, WCGS created a scholarship
in memory of Dorothy. The Dorothy Sevier Matson Scholarship was awarded for the first time in
June 2010.
WCGS is very pleased to be able to honor Dorothy in this way and feels this scholarship is
a perfect tribute to her love of the region’s history and genealogy and her support of education. One
of Dorothy’s favorite phrases was: “…for my own amazement.” We think Dorothy would be very
amazed, pleased and humbled to have this wonderful tribute to her. 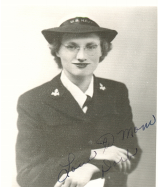 We would like to announce the winners of the Dorothy Sevier Matson Scholarship. Justin Thompson and Safaa Turner-Rahmen will each receive $500 towards their college education. Thank you for applying and good luck with your future endeavors!

Would you like to assist our Whitman County Genealogy Society?  We are currently in desperate need of a recording secretary, for our monthly meetings, September through June.  If you are interested, please contact our president, Sue Kreikemeier, at sueprime7@gmail.com.  You would be required to attend the meetings, take and record minutes, and provide them before the next meeting.  Such a simple task to help out our small Society.  Whoever you are, we look forward to meeting you at the next meeting!

In just one week Eastern Washington Genealogical Society is having their Spring Seminar.  This year they are featuring two speakers.  The first is Karen Stanbary.  She will be speaking on

The Everleigh Sisters: A Case Study in Conflict Resolution – Minnie and Ada Everleigh, Chicago’s most famous pair of sisters, fabricated many details of their lives in order to run their shady business. Learn to sort the fact from the fiction.

The second is Maureen Taylor, The Photo Detective.  She will be presenting her

Photo Detective Roadshow – EWGS members submit photos and Maureen does a live show weighing in on their mysteries!

There will be an online talk to focus on life of Sacajawea’s son, this Saturday, February 13th at 1 p.m.
Jean Baptiste Charbonneau traveled more of the West as a baby than most people have in their lifetime. Charbonneau, also known as “Pomp,” was the son of Sacajawea, who traveled with William Clark and Meriwether Lewis and the Corps of Discovery. His story will be shared in “The Life and Times of Pomp: Jean Baptiste Charbonneau” at 1 p.m. Saturday during an online discussion by historians Garry Bush, of Lewiston, and Steven Lee, of Clarkston. After traveling through Idaho to the Pacific as an infant, Pomp grew up to be a fur trader, helped chart the Sante Fe Trail and was one of the first gold miners in California. He died along the Owyhee River in southwest-ern Idaho in 1866. Registration for the event can be done through this shortened link: bit.ly/3tvfwH6.  The event is presented by the Nez Perce County Historical Society and the Lewis and Clark Heritage Foundation Idaho Chapter. !

RootsTech is FREE! and virtual, this year.  This experience begins in 2 weeks!  This would be a great time to check it out and see if you would want to attend, in person, in the future.  For more information, and to sign up, go to:  www.rootstech.org